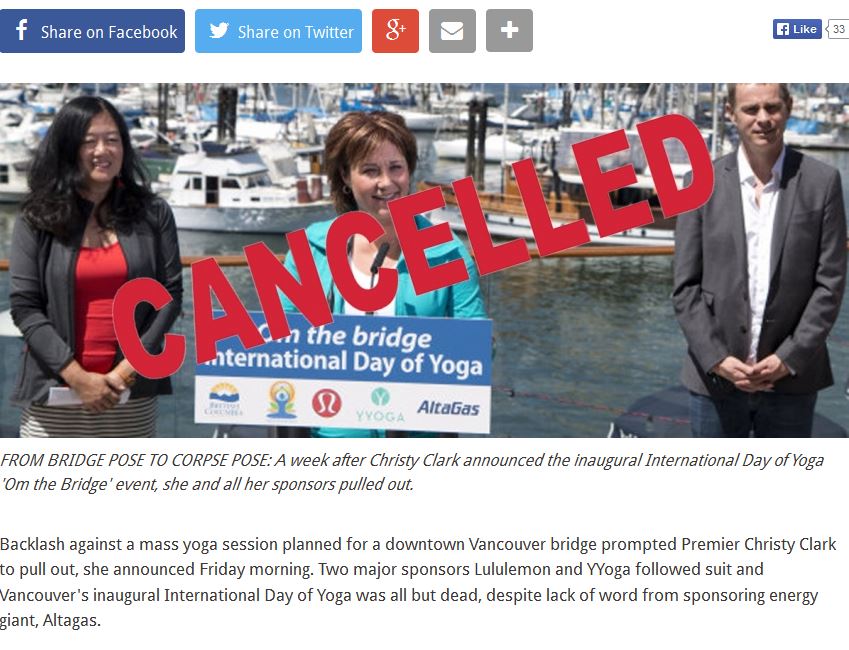 For those who live in BC I am sure almost everyone has heard about the incident of the premiere Christy Clark cancelling the closure of the Burrard bridge to celebrate international day of yoga. For those who are unaware, this generated a lot of backlash from the public for multiple reasons such as people feeling that this is money and politics coming into to play.

It seemed that the biggest reason that people reacted to this though was the premiere’s attitude about it. For example, even in her Twitter feed she posted a sort of “troll” remark to everyone who disagreed with her decision. As you see in the screenshot, here she says “Hey Yoga Haters- bet you can’t wait for international Tai Chi day.” 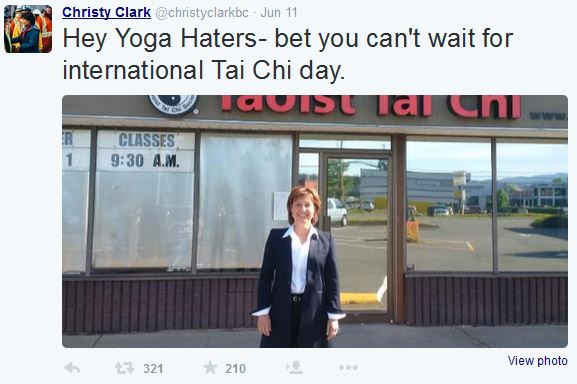 Eventually, she decided to back out of the event as well as a bunch of corporate sponsors due to the bad publicity it was getting.

Ever since my experience of going through the BC court system I gained a little extra interest in politics as I was surprised to learn details such as how judges are appointed by fellow lawyers. For whatever reason I always thought it was more democratic than that where it must involve the public. In many ways, that creates a scenario where people in the system don’t have to answer to anyone in the public. So, it made me think why did this situation cause a government body to back out whereas in many other situations things would just go as planned despite public resentment?

The only real thing I could think of was that maybe the corporate sponsors wanted to back out for fear of a backlash to its brand. Therefore, it has more to do with money. Maybe they didn’t feel they would get the return in sponsoring the event and so they backed out. Sad to say, it was highly unlikely due to addressing concerns of the public as an example.

That brings me back to my current thoughts on how if people want answers and tangible progress to fixing what many would say is a broken court system then you have to target items like the financials and get people to highlight it in a way that the general public will care. I recognize that in a situation where it’s about having and using a lot of money and influence to effectively highlight such a thing that it is definitely out of my capabilities as a single voice.

Who will that person be? For now, I will simply blog my opinions whenever I have time and present all my facts in hopes that a person with more influence and resources can use it as part of a bigger solution that will have impact.