Trial Conference 3 – With BC Judge Rideout

Almost two months later, here was the third trial conference. This time, it was a new judge again. Bad news though in many ways as this judge apparently wasn’t a judge that normally sits at that specific court location either. So that means the previous judge’s recommendation was completely thrown out the window where we were not going to get the same judge for the trial. Remember, this is all “without prejudice” again.

So the main thing in this session was to make sure that we all had our evidence organized and for the judge to help narrow down the issues. And again………….due to technicalities of the court system to my knowledge I can’t talk specifically want happened in here to further expose the system at work. Session only took like five minutes. This was the end result and the form that was produced: 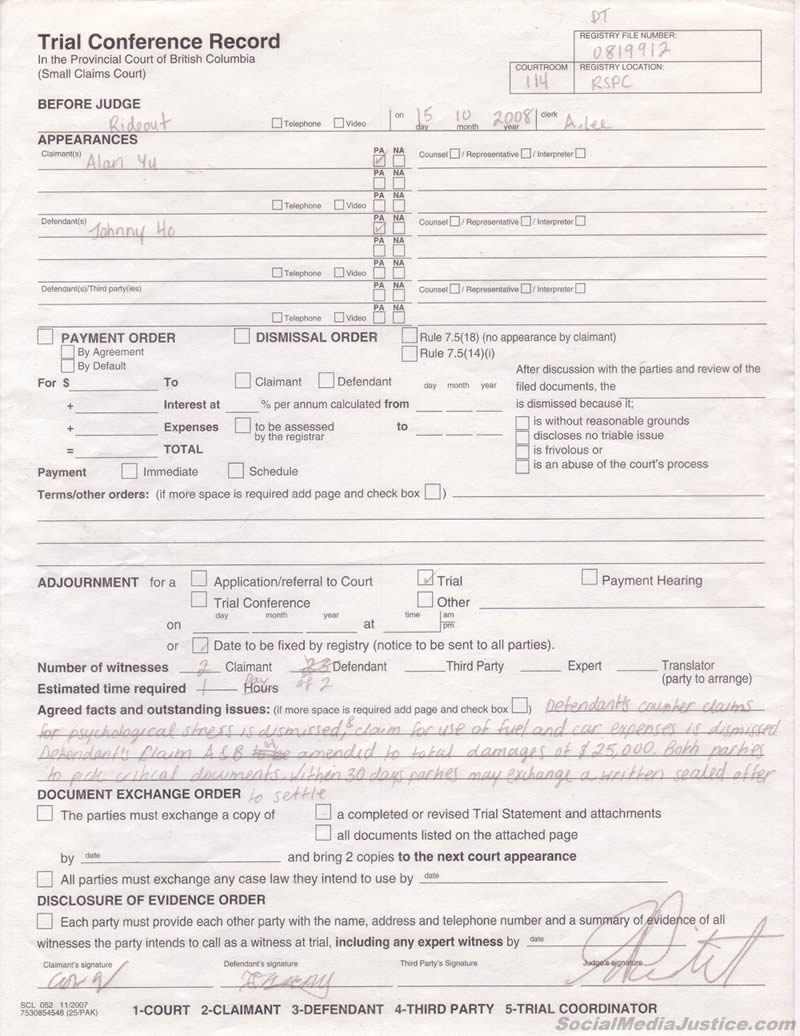 With that, the session was over and the next step was the trial. Again, this session showed me how the court system was based so much on the judge themselves and not necessarily the facts. You can have all the facts in the world, but if the person does not take time to understand the case then there is nothing you can do.

At the same time, this showed me that the court system gives way too much benefit of the doubt. Like in the defendant’s case, it should be “prove it”. Example, he says he worked all those hours so prove it. If he has no proof, it should be dismissed immediately. Don’t you agree?

While my situation isn’t about say some deadly criminal case, this just kind of reminded me of all the stories I hear on how people fly by the system as the victims endure the pain and suffering of the wait times, ridiculous amount of procedures and outdated logistics system to get to the point. With my case as an example, don’t you think it would be more logical at minimum to have the same judge handle everything? Why allow either party the opportunity to say change their stories every time or finding silly technicalities to drag the case on? Not to mention the system confusing itself by having so many judges at different times.

I am almost inclined to say that the current system works against people who are telling the truth. If anyone knows more about this legally in terms of our rights to publicly talk about the specifics on what happened in these types of sessions please let me know as again I feel if I was 100% allowed to explain what happened in here it would shine a bright light as to how this process needs fixing.