This Laughing Witch And Thunderf00t Saga Makes You Think

This story is going to be very awkward for those who don’t exactly follow online media sources. But it demonstrated almost exactly on how I feel using social media and regular people can flush out the truth way more efficiently for standard cases rather than say a judge in a court room. At least the ones here in BC Canada. Fortunately, since this social media story was mostly told through videos I am hoping you will simply watch them to get the full details as I relate them back to the court process I experienced.

In a nutshell, a lady named Jennifer Keller who goes under the alias of “Laughing Witch” disagrees pretty passionately with the views of a man named Phil Mason who is identified online as “Thunderf00t.” The topic revolved about feminism and as you can imagine that usually generates angry debates if the two sides don’t see eye to eye. Keller decided to write a letter to Mason’s employer in hopes that the institution would see how his behavior is unacceptable where she at first denied writing the letter. For one reason or another, she thought he got fired over this and many of her supporters seemed like they were celebrating over this fact.

However, with Internet research it was exposed pretty quickly that she was indeed the writer of the letter. Now Mason didn’t get fired over this too as some assumed. As a result, he released these facts on the Internet and the online audience began to research out of curiosity.
Keller also spoke in a video how essentially no one can do anything to her if they say wrote a letter to her boss as that is her husband since they run a business. Boy was she wrong though. People started to take initiative and expose to the world factually on her actions to educate others on what the owner’s of the business have done.

As a result of this, it appeared that they started a campaign of sort to demonstrate how they are being targeted by a vicious hate mob with no merit.

They even created a funding campaign asking for $25,000 to help circumvent this whole incident. 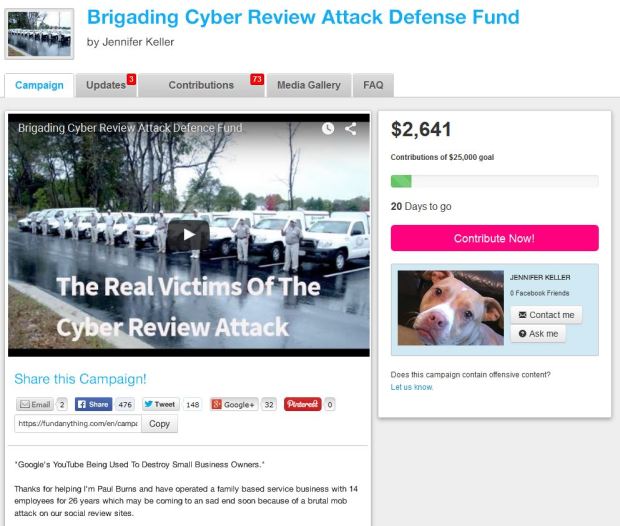 As well, it appeared they got the local media to do a report on it which you can see here:

A different Internet user decided to investigate into the business and its dealings. There was some interesting discovery as you can see here:

The saga continues it seems, but from what I read Mason seems to be winning factually. That media report of the incident in essence reminded me exactly like how the BC court process was. It’s almost like saying, it becomes more of a game on trying to create a story narrative and hoping the right people will believe it. This is as opposed to simply throwing the facts and focusing on getting the truth. Like the media example too, depending on which journalist you get the facts can be ignored.

Now what happened when the story got out to the general public to research about the issue? While it may not exactly be the most politically correct way of handling it, enormous pressure was placed on people to find out the truth. While I don’t think it is right to leave say fake negative or positive comments to a business to get attention, this is kind of a classic example on how if one party feels that the repercussions to telling a false story is nonexistent then why would people bother to say tell the truth?

In this case, the pressure came from the public that was insistent in pushing until the truth came out. The repercussion, while unfortunate, was that Keller and her business will never hear the end of it until people feel they got the whole truth out. As well, every false story or fact presented was archived, scrutinized and taken seriously where the perpetrator will for sure see a repercussion to it. So reflecting this back to the courts in Canada, why is there not a mandatory law of sort that effectively punishes people for telling false stories in court? Is it not obvious like here on how immediate repercussions of actions like these help to flush out the truth faster?

I can imagine if this dispute went to court we would basically be trapped in a situation where it is simply watching news reports and trying to determine who is telling the truth that way. You may think I am exaggerating, but if you have not already you can read all of the documents I submitted about my experience in taking a person to court. Just makes me think more that a truly open public courtroom of sort is way more cost effective and efficient for simple cases. It doesn’t need to be super complicated or expensive as ordinary people can be just as good if not better in compiling the facts.