Now one of the very unique things about this case and what I would consider as a stroke of fate is that I obtained a word document that outlined what the defendant was going to essentially tell the courts.

How did this happen? Not too long after the defendant took off, as mentioned I had a lawyer send him a demand letter to show that I was serious in wanting my money back. As a result, it looked like some of his family members either ignorantly or intentionally then tried to cock up some story to make him look like this victim and me as the offender instead and with that story they took it to a lawyer it seems to try and see what they can do to me.

Now for this particular document, his sister appeared to have written out this document and then it looks like she instructed him to fill in the blanks. So by the looks of it, she attached this word document and sent it to his e-mail address. The problem for her? She was clumsy and she sent it to the old e-mail address that the defendant was initially using for business before he ran away. Hence, this e-mail address resided in the domain that I owned and so I was able to obtain a copy of it. This was the document and the story which appeared was what he was going to tell the courts along with his strategy on how he was going to try and make it sound convincing: 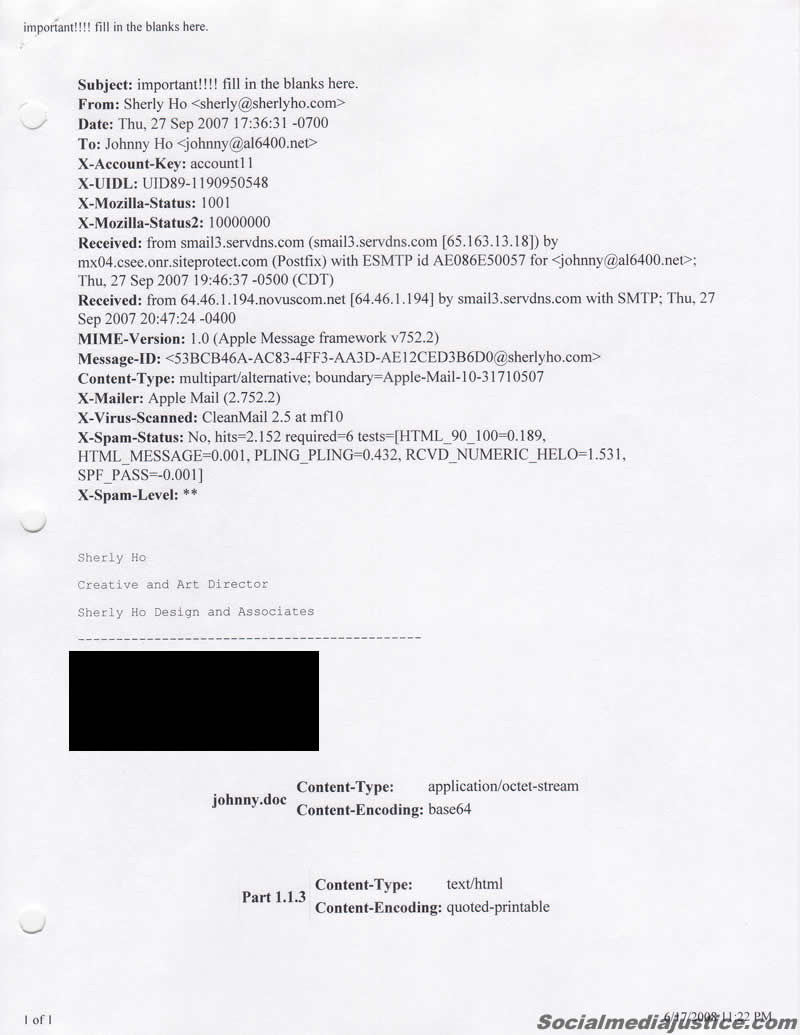 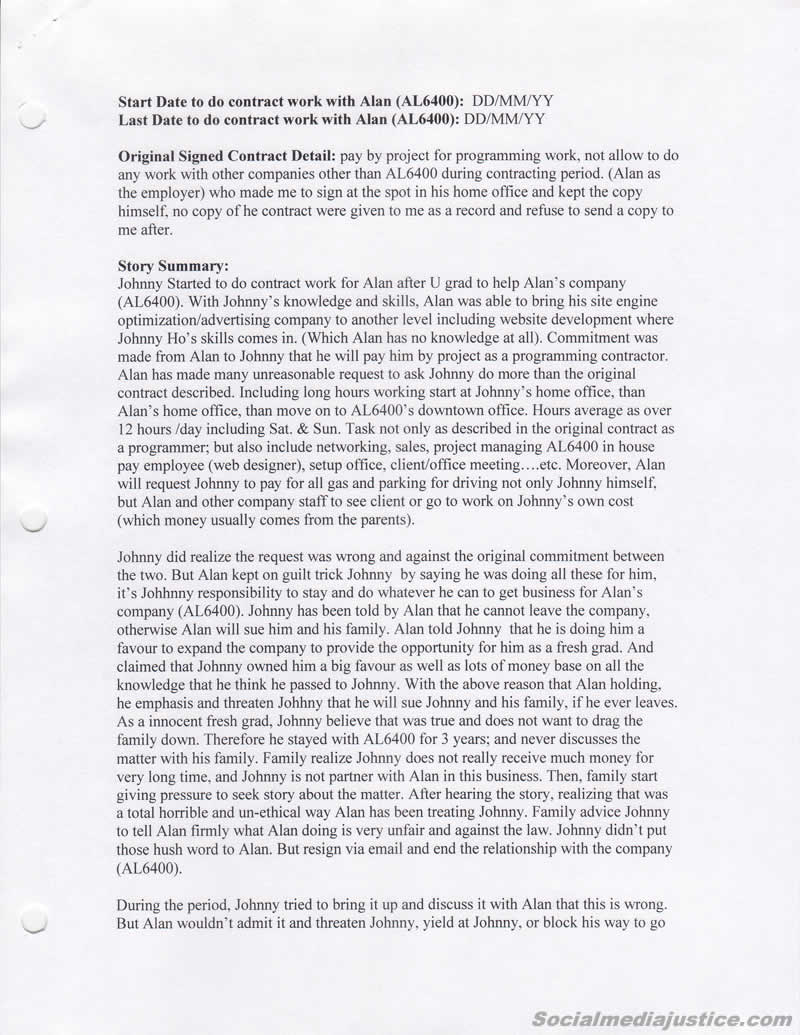 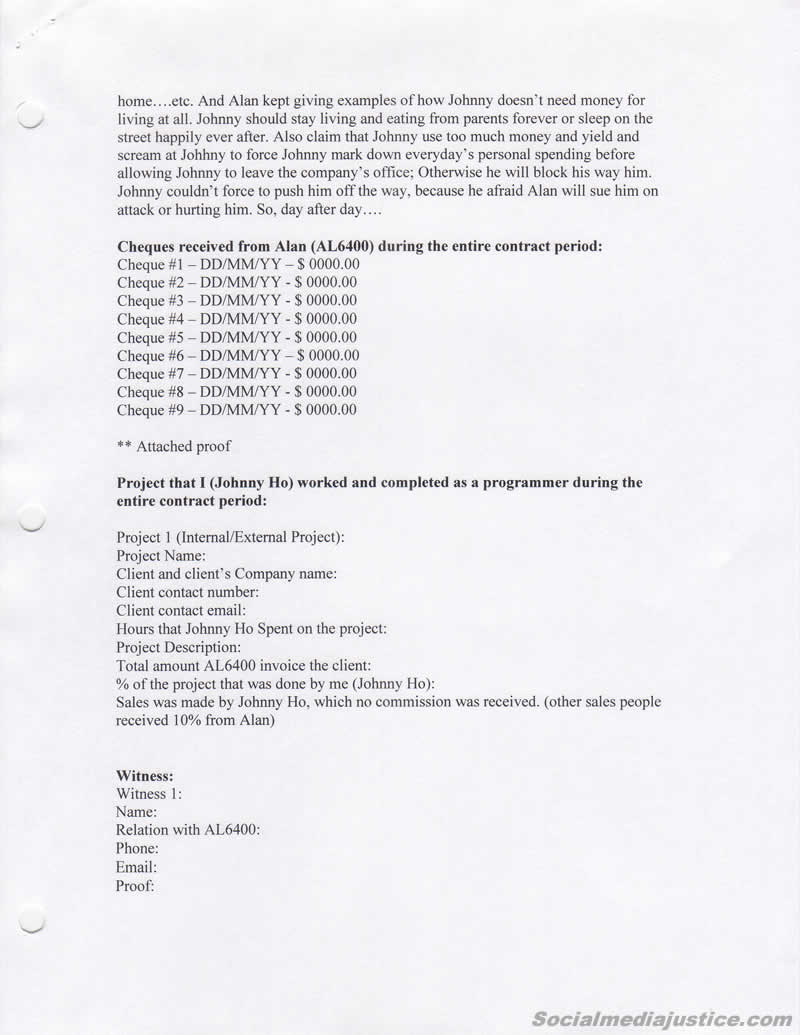 I must say, while this was really good evidence it hurt a lot reading this. I was disgusted at how far this guy was willing to go with his story. As well, this document clearly showed me how he has been defaming me all this time. As mentioned before, this is when the lawyer suggested that I go after him immediately. However, I had to take some time off.

This made me realize how far he would go so I better be organized in terms of slamming him in every aspect with proof that will prove my case and expose this false story. Because credibility should play a big role in a case like this too right?

From a court point of view though, as you can see in his statement of claim he pretty much follows that game plan document and so he was trapped in a corner. How long would it take you to come to a conclusion in regards to the defendant’s tactics and credibility? Would this not make you immediately question the validity of his defense and counter claim if I was able to clearly demonstrate a large list of points that are clearly untrue? How long would it take you to verify information for contradictions and inconsistencies especially with this kind of proof? One minute? One day? One hour? One year?

As well, what this really made me think of is the whole aspect of telling the truth under oath in court and the concept behind charging a person for perjury. To me as an outsider, assuming I prove to you that he did lie I thought this was great as to me this qualifies as a person going to extreme lengths to present a false story in the court system and I thought I would get justice for sure in that aspect.

It sounded like others were going to help him carry out his false stories too either willfully or unsuspectingly. So in that sense, if he was able to convince anyone else to support his story, again I thought that the justice system would prevail and it made me even more confident about this whole case.