Application To A Judge

Now the next step was to go to trial. As I mentioned, I found it ridiculous that the defendant was constantly allowed to change his story while concealing evidence such as not disclosing his final list on exactly which witnesses he was going to bring in and what they were going to specifically say.

Therefore, from reading about the court process I had to submit an application to the judge to try and get an order for him to reveal this and I submitted this form: 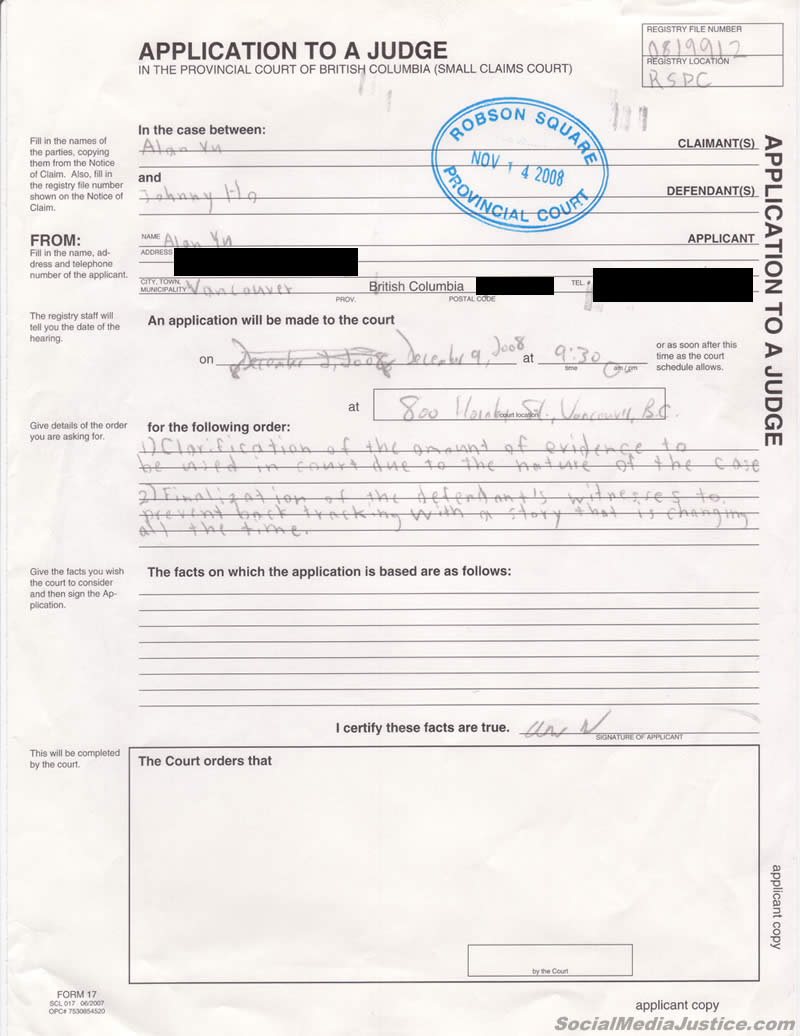 The unfortunate thing? It seemed like he was constantly hiding. In fact, he even changed his address during this court process. Therefore, I had to do things out of the ordinary such as hiring a processing server. As it turned out, it appeared that it was as if he was either out of the country or went in hiding somewhere. The processing server even mentioned he stayed at a particular address for awhile. Therefore, I was unable to give him a copy of this notice and therefore I was unable to force him to reveal his evidence.

However, I did attend the application to a judge session. She mentioned that she couldn’t really do anything as a result and couldn’t give me any legal advice. Even the process server gave me a written letter indicating his efforts to serve the defendant which was ultimately submitted and entered into the court records. Instead she kind of said in a mellow way that I could try to send it through a regular mail too. I think I got exactly what she was really trying to say. You see, in the court of law to my understanding if you do not disclose exactly what evidence you intend to use then you can’t use it. Basically, no surprises like in a Hollywood movie.

So in that case, to my knowledge since he did not disclose things like his final list of witnesses and what they were apparently going to testify I assumed I shouldn’t even need to worry about it as technically they shouldn’t even be allowed in the trial.